Sherlock Holmes Like You've (probably) Never Seen Him Before 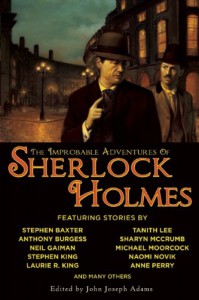 This was the last book I finished in 2014 and it fulfilled one of the categories in the Eclectic Reader Challenge (ERC).  It is a good argument for participating in a challenge that is meant to push one out of normal reading ruts because this was fun and I can’t remember the last time I read an Anthology.  Figuring out how to review it may be a challenge all in itself!

As the title suggests, the anthology is a collection of short stories by many different authors but all featuring the Sherlock Holmes “mythos”.  Some of the stories are straight up mysteries that stay faithful to Conan Doyle’s vision, some stretch the boundaries and bring in speculative elements.  It contains 28 different stories edited and compiled from various sources by John Joseph Adams who seems to have made a living curating various interesting looking anthologies (the link on the title will take you to his website).  Some of the most notable authors (for me) with stories in the anthology include: Stephen King, Anne Perry, Mary Robinette Kowal, Laurie R. King, Sharyn McCrumb, Michael Moorcock, Barbara Hambly, Naomi Novik, Tanith Lee and Neil Gaiman.

I really enjoyed the collection as a whole.  There was only one story (The Adventure of The Lost World by Dominic Green – yes it involves dinosaurs) that I didn’t like that much.  Several of the stories shared a Lovecraftian influence but otherwise there was little to tie them together besides the characters and concepts of Conan Doyle’s creation.  A couple of them feature different narrators besides Watson which was interesting.

A few highlights for me were:

Stephen King’s The Doctor’s Case – A locked room mystery where Watson gets to solve the crime!

Sharyn McCrumb’s Vale of the White Horse – Told from the perspective of a village healing or wise woman in rural England.  It is short but complete and features a case where folk legend plays a surprising role.  I really liked the unique voice and it made me want to pick up some of McCrumb’s novels.

Rob Roger’s The Adventures of the Pirates of Devil’s Cape – A rather unlikely but really fun and swashbuckling adventure that involves Pirates!!! (I like pirates.)  The deductions in this one were  particularly creative.

Tanith Lee The Human Mystery – Holmes miscalculates because his understanding of the fairer sex is not always spot on.  Very atmospheric with a twist.

Final Verdict: If you enjoy Sherlock Holmes and you don’t mind having him played with a little I think you will find at least a few stories in this collection that will make you happy. 3 out of 5 stars ✪✪✪