Drowning Under a Sea of Teenage Self Pity 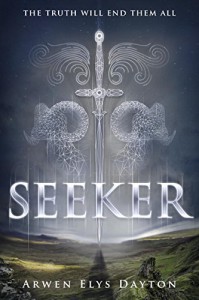 Format: eBook - Thanks to Delacorte Books for Yong Readers for providing me with an advanced reader copy of this book (via NetGalley).  My review reflects my honest opinion of and experience with the book and was not influenced by receiving the book for free from the publisher.

The story begins on an ancient Scottish estate in a unspecified future or perhaps even an alternate now.  Teenagers John, Quin and Shinobu are all hoping to pass their final test by combat and be initiated into the secretive and very rare ranks of the Seekers.  John is denied the privilege and it is clear there is some dark history between he and the master Seeker Briac who is also Quin's father.  Quin and Shinobu are initiated but find, to their horror, that being a Seeker is not what they imagined it to be.  As they are dealing with this, John returns to claim one of the sacred tools of the Seekers which he believes is his by birthright and he continues to incompetently pursue this instrument for the rest of the book causing all sorts of trouble for his once girlfriend Quin.

I will be very interested to see other people's responses to this YA Sci-fi/fantasy.  I had a lot of problems with it but don't know how many of them relate more to 1) not being a teenager or 2) not being in the mood for the particular tone of this book.  I'd rate it a three out of five star read because it does have some marks in the good column but the strikes in the negative column were weightier.

- The tone is extremely emo and angsty, almost from page one.  One of the characters tries to commit suicide for goodness' sake.   It's like being thrust directly into Mockingjay without the buildup of two books to explain or give weight to the intense negative emotions all of the characters are experiencing.  This is where mood and personal preference may have come into play.  This tone is not my cup of tea and I was particularly not in the mood here.  I did not like Mockingjay, The Order of the Phoenix is my least favorite Harry Potter - i.e. I'm not a big fan of reading about teenagers wallowing in self pity even when they have a good reason to be doing so.

-  The plot relies too heavily on secrets and in many cases it's hard to even understand why they are secrets.  John wants something and he was charged to get it by his dead mother and feels like he is not only justified but also entitled to the thing but he will not explain this to the girl he supposedly loves - he instead threatens and browbeats her.  For her part, she has a complete lack of curiosity as to why the boy she loves is all of the sudden threatening and browbeating her and instead blindly resists his requests because she doesn't want John to experience the horrible things she has.  BUT... you guessed it... she doesn't tell him about the horrible things but instead tells him vaguely and rather patronizingly that he shouldn't have it.  If these two characters had interacted like actual human beings who cared for one another there would have been no plot - or it would have been very different and I may have liked it better.

- As I alluded to above, I found 3 out of the 4 POV characters, at best boring, at worst downright irritating.  Quin has no personality, and is completely self-delusional but that doesn't stop her from being holier than thou whenever she gets the opportunity. Shinobu is a selfish jerk for 3/4 of the book. John at first seemed intriguing but quickly became very annoying, not because he was doing questionable things, but because he was so ridiculously stupid and incompetent at it all.

- The Romance:  We are thrust right into the middle of a love triangle which isn't one of my favorite things to begin with.  We have no relationship development and there is exactly zero chemistry between any of the characters.

FINAL VERDICT: I think this book will work for some readers especially if you like your YA fantasy dark and angsty.  While I found some things to like I don't think I will continue on in the series.