I am completely overwhelmed and intimidated by the prospect of writing a review for this book.  It's probably fair to call it a modern classic and it's been reviewed many times by much smarter and more perceptive people than I.  What can I possibly add to the conversation that hasn't already been said about this book?  Undoubtedly nothing but I have thoughts and feelings that must be expressed so I'm ignoring wisdom and putting them out there regardless. Second problem is that with a book this good, nothing I say is even remotely adequate.  Hopefully my dithering is enough to convince you of this book's all around awesomeness. It will easily be on my top ten reads of the year list if not of all time.

I come to this book already a big fan of westerns and that predisposed me to love it but I'm not sure you need to have an inclination towards fiction set in the American frontier.  Lonesome Dove is really about people.  People who've had a very different life than I've had but who still managed to seem familiar.  Many of them are extraordinary though most of them are just incredibly ordinary.  The book is told from many different perspectives and their voices are all completely alive.  If you like inhabiting other people's skin, this book will be a satisfying and overwhelming buffet.

The plot is as winding as a cattle trail, which is mostly it's purpose. The overarching narrative is about the small Hat Creek Cattle Company nestled in the dry desert of south Texas deciding to be the first outfit to move cattle into Montana and establish a ranch there.  The Hat Creek company is owned and operated by two rather famous but retired Texas Rangers, Captain Woodrow Call and Captain Augustus McCrae, less formerly know as Call and Gus. 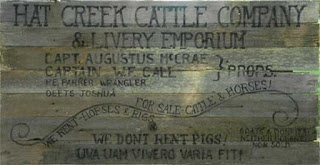 The cattle drive is the main river of the narrative but it has several streams, the most substantial of which is the somewhat inept but earnest exploits of Sheriff July Johnson whose storyline intersects with Gus and Call's a few times.  It felt like McMurtry had this loose central line of a plot which he kept in mind but didn't tie himself to, allowing his writing to flow wherever it took him. While everything does flow there are times when the tributary you are floating in is quite small indeed.  We spend a a number of pages in the head of July's erstwhile wife before that line abruptly peters out. There are a couple of main perspective characters but we get inside almost all of the characters at least for brief periods.  This writing style would normally drive me crazy.  I tend to gravitate towards and most appreciate books (and series) that have been intricately planned out and cleverly plotted but with Lonesome Dove I was so entranced by every single thing and person that appeared that I wanted it to keep going forever.  No matter where McMurtry took me, it was exactly where I wanted to be and I found the book to be a compulsive listening experience.  I wanted it to be longer than it's 945 pages.

I think a key thing to know about the book is how funny it is.  The tone is so incredibly perfect; it's this balance between humor and tragedy, hope and philosophy, dysfunctionality and wisdom that it seems to capture the very essence of the human experience.  I know this probably sounds pretentious but the point is that the book is not at all pretentious.  It's warm and down to earth.  This book made me frequently laugh out loud or grin like a fool, often in public.  It also brought tears and sadder emotions but the brutality that was a very real part of life in that place and time was always kept in check by the ridiculous and the heroic.  Since I'm afraid I've made it sound all rambly and existential, I also need to point out that it's not that at all.  It's chock full of all the things people look for in a great story; adventure, gunfights, beautiful settings, suspense and romance.

The muse or choirmaster of the book, in my mind is Gus McCrae.  Gus very quickly and firmly became one of my favorite fictional characters of all time.  I don't want to describe him because I will not be able to do him justice but almost every single one of the sentences from this book that are worthy of taking special note of, and there are lots of them are either said by or about Gus.  He's got a wry and wicked sense of humor which has enabled him to experience many terrible things in his life and come out the other side at peace.

“If you want one thing too much it’s likely to be a disappointment. The healthy way is to learn to like the everyday things, like soft beds and buttermilk—and feisty gentlemen.” - Gus McCrae

He's utterly unique and I adored him more with each page.  I could have read a 1000 pages more of him extemporaneously speaking.  His relationship with the taciturn and workaholic Call is also one of the more delightful and fantastic things in the book. It also has to be said that while Gus was certainly my favorite character, the book is loaded with fascinating people all of whom were worthwhile spending time with.

FINAL VERDICT: If you enjoy humor, character-driven fiction and compelling storytelling than you owe it to yourself to read this book as soon as you possibly can.  I can't imagine another book that could unseat this one as my favorite read of 2015.