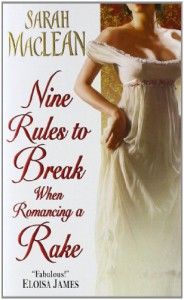 Romance is a huge hit or miss genre for me.  I really enjoy a good romance but I'm picky about what I find to be good.  So finding a new favorite romance author is always VERY exciting.  MacLean was brought to my attention by Rebecca Schinsky of Book Riot. While she and I's book tastes don't overlap terribly, she is an outspoken feminist and fan of literary fiction so I figured if she liked MacLean, I figured her books should be a decently written and feature heroines who wouldn't make me want to scrub my brain out.  I wasn't disappointed!

Calpurnia Hartwell is a well bred lady on the shelf at the age of 27.   She has always played it safe and by the rules but as her younger sister prepares to marry she starts to question what having a spotless reputation has done for her and what it is she really wants from her life.  She makes a list; a bucket list of sorts; of nine things she wants to experience and damn the consequences.  What does she really have to lose after all?  Number one on the list is to be kissed.  In a fit of boldness she decides to approach the man she's had a crush on for 10 years, ever since he'd been kind to her during a disastrous ball in her first season. The Marquess of Ralston has a rake's reputation so she figures he'll be obliging.  He is but he also exacts a price: he wants Callie to use her impeccable reputation to help launch his somewhat scandalous sister into society.  Thus the dance begins.

The most important part of a romance for me are the characters and that is definitely a strength of this book.  Callie is just a regular woman - nothing super special about her.  In fact, on the surface, she's quite dull as she's always followed society's rules and as such does her best at being invisible.  She's got low self esteem which I know may irritate some readers but I think it is a real problem amongst women (and men, really) and was likely especially bad in Regency Era England when women were not valued much.  The book does a good job showing how irrational and crippling it is.  While she is not stunningly beautiful (thank god), she's attractive enough and has a great personality and she shouldn't have had a problem finding a husband but her conviction that she is ugly convinces others she's not worth bothering with.  Her "bucket list" is her declaration of liberation - she finally decides that she matters and that she deserves to find pleasure in life.

Ralston is an alpha hero but I found him to be pretty laid back for his ilk.  He can be grumpy and controlling but mostly when things aren't going well.  Otherwise he's charming and has a live and let live attitude.  Most importantly, he always respects Callie and sympathizes with her desires to break free from her oh so proper life even if he find her exploits inconvenient.

I am a fan of the trope of a long-time unrequited crush which this romance employs to great success.  Callie and Ralston fit well together as a pair.  And the feminist credentials?  Many of the items on Callie's list are things that were major symbols of male privilege at the time; smoke a cigar, drink whiskey etc....  It explores how stifling a woman's existence likely was at the time and gently pokes at it without being strident.  It's kept light with a generous dose of humor and lots of romantic tension-based banter.

There was a thing or two I didn't love.  I don't love when a heroine is challenging the hero or she's irritated with him and he shuts her up/makes her forgive/forget everything with a make out session.  A little of this is fine but it happens a little too much in this book.  However even with this, it was a totally delightful read!

FINAL VERDICT:  An original heroine, in that she's pretty ordinary, and her journey to stop being what society expects of her makes for a really great romance!