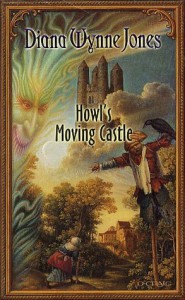 I was excited to read this book for a couple of reasons.  Reason one was that I had never read anything by Dianna Wynne Jones.  Shameful, I know, but at least I have corrected the deficiency!  The second reason, which drove my choice of Howl's Moving Castle is that I adore the Miyazaki film so much that I even own it.  More about the film later in the post.

Howl's Moving Castle takes place in a somewhat recognizable world that is just a little bit slanted.  Sophie is the eldest of three sisters and as such she is not expected to do much in the world.  She has so embraced this idea of her own insignificance that in many ways she has given up on life.  She makes hats in her family's haberdashery and doesn't even notice when her creations change people's lives.  One day, inexplicably, the Witch of the waste comes into the store and places a curse on Sophie, changing her into an old woman.  In a somewhat vague attempt to have the curse removed, Sophie runs into the countryside looking for the fearsome Wizard Howl and his moving castle.  She finds him and discovers that Howl is not exactly who she thinks he is and somewhat more surprisingly that she is also not who she thinks she is.

My favorite part about this weird tale is how Sophie slowly gets to know herself.  The change in her appearance - being in disguise - frees Sophie to be bolder and ironically truer to herself.  She has strong opinions and is rather forceful about expressing them, nagging the flibbertigibbet Howl into being more responsible and less self-absorbed. She's much braver as well, running across the countryside when she thinks her sister is in trouble and even going toe to toe with the King on Howl's behalf while at the beginning of the story she was almost too timid to visit her sister at a baker across town.  Her will is even strong enough to tame Calcifer, the fire demon that powers Howl's extraordinary home.  Sophie also succeeds, quite quickly, in turning the castle into a home, providing structure to the household and serving to balance Howl's unpredictable ways.

Howl is also fascinating.  He is playing a role that actually serves to conceal who he truly is.  He works out almost right away that Sophie is under a curse and isn't really old.  His dealings with the King that make him seem a coward are also a ruse that allow him to eventually defeat the Witch of the Waste.  It is impossible to know how to take him - his sister back home in Wales (!) despairs of him but he cares for his mundane family and does everything he can to protect her and his niece and nephew.

Basically, neither Howl nor Sophie are your typical romantic hero and heroine and for all that their story feels more sweet.  Because they do fall in love of course but it is so gradual, born out of getting to know one another.  Sophie denies it the longest as she gets crabbier and crabbier every time she thinks Howl is out wooing another woman.  Meanwhile Howl is slowly trying to give her everything he thinks she wants including becoming a better self.

All that unique character stuff is also wrapped up with the wonderful imagination of Diana Wynne Jones.  Enchanted scarecrows with turnips for heads, enchanted dogs smitten with their mistresses, a castle that is really four things at once in four different locations and a fire demon that is really a falling star.  What Calcifer is and the nature of his contract with Howl is a mystery that runs throughout.

If I have any complaints it is that the story is at times a little confusing.  One example is that a connection to our world  - the mundane modern world where Howl comes from and where he is known as Howell - is thrown in with very little explanation about the how the connection between the two worlds works.  That's fine but it seemed like a confusing addition that didn't really add much to the story though perhaps it does in later books?

FINAL VERDICT:  An imaginative story of self-discovery that has adventure, romance and an unmistakeably unique quality to it.  Tells a rather classic tale in a lovely unique way.